(09 Nov 1999, Mexico) A Mexican jail guard died from an excess of zeal while supervising an inmate's conjugal visit. Raul Zarate Diaz was closely watching his charge from the roof of the prison when he tripped over an air vent, crashed through the skylight, and fell 23 feet to land beside the bed where the inmate and his wife were, against all odds, enjoying an intimate moment. The interrupted prisoner, offended by the intrusion, attempted to start a riot, but was squelched by prison security.

Prisoners in the Tapachula facility reported that Diaz was in the habit of prowling the prison roof during conjugal visits, in search of prisoners to supervise. Local law enforcement reported that the guard was clutching a pornographic magazine, which was retained as evidence, and binoculars, whose sentimental value led to them being given back to the family of the deceased. 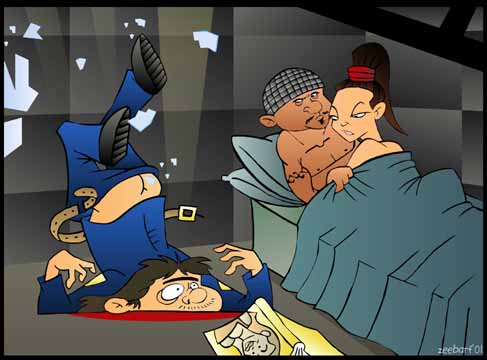