(14 November 2018, Andaman Islands, India) John Allen Chau, a self proclaimed world explorer inspired by Livingston and Jesus, was killed by the very tribe of natives he was offering eternal life. According to the BBC in Delhi, Chau bribed six fishermen to ferry him to the off-limits island so he could offer the Sentinelese tribe gifts of scissors, a soccer ball, and Jesus.

In a letter he wrote to his family, this Vancouver resident and Alabama native said he wanted to make contact with the 60,000 year old tribe because "The eternal [life] of this [Sentinelese] tribe is at hand."

He paddled to the island in a kayak and was immediately "attacked by arrows but continued walking," stated the global news agency AFP. The fishermen then witnessed the natives "tying a rope around his neck and dragging his body" along the shore. They were clearly rejecting his gifts.

The tribe, the most isolated on earth, has taken a well documented, zero tolerance approach to visitors since a British occupation almost wiped them out during the 1800's. It's no surprise Chau's remains remain unrecovered.

Was he a martyr as friends claim on Instagram? a missionary according to his parents? or just a selfish selfie seeker? or a genocidal maniac bringing the tribe life threatening disease, as his bible quote from Revelations 7 indicates? He said he wanted to "see them around the throne of God worshiping in their own language as Revelation 7:9-10 states." We'll never truly know the answer, since the tribe doesn't seem to have updated their social media accounts in quite some time. 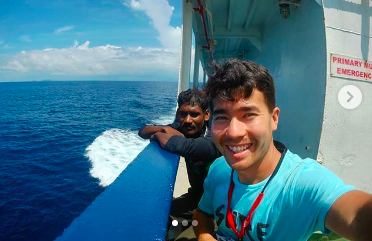 READER COMMENTS:
"Slings and arrows of outrageous...stupidity." J.Foreman"
"The cure for total stupidity: Arrows." -S.Naf
"We'll miss him at the award ceremony."
"Can't say his death was pointless." -C.Hirst
"Natural Selection Strikes Again." -N.Magouirk
"Play stupid games, win stupid prizes." -S,Coghan
"Locals were testing before buying." -V.Stephanovic
"Nobody stopped him as he waded in over his head."
"Ignorance and arrogance, a dangerous combination." -S.Gibson
"Does it count as a Darwin Award if he planned to remain celibate?" -P.Carafa
"What piercing insight! he was well shafted, wasn't he?" -D.Jones
"Paper beats rock, rock beats scissors, arrow beats bible." -C.Reece
"Hopefully they will bury some clown shoes in his honor." -E.D.Hubbard
"Suicide by pride." -M.Martensson
"God has a deadly sense of humour." -J.Levett "That was certainly a rather piercing rejection." -M.OWen
"You will not fear the terror of night, nor the arrow that flies by day," Psalm 91:5
"He wanted to introduce them to Jesus. Instead they introduced him to Jesus." -M.Barrett

Laurence Lubin says, "And it wasn't a one-off. He attempted to land on the island three or four times. The shot at him the first time he landed and he paddled his kayak back. He returned. The smashed his kayak and he had to swim to the boat. The last time...well. The wages of stupidity are often death."

Alex Stone says, "When I first heard about this I thought, "Poor bloke. He didn't deserve that!" Then I found out exactly where it happened and lost a fair bit of sympathy. There are so many videos and articles about that island and why you shouldn't go there that the guy might as well have stood on top of a hill in a thunderstorm holding a lightning rod."