(1999, England) Wayne wanted to make a few bucks by selling stolen scrap metal. He sneaked into a demolition site and surveyed the area for valuable hunks of debris. His eyes fastened upon what appeared to be a 3" thick copper pipe. That would fetch a fine fee! But it was too heavy for him to budge it.

He hauled a few lesser chunks of metal away, and returned with sturdy bolt cutters. It was then, when he attempted to sever the pipe, that he was shocked to discover that it was actually an aluminum cable carrying 11,000 volts of power. The paramedics who later tried to revive the electrified Wayne were thwarted by the current. He did not survive to be charged with his offences. 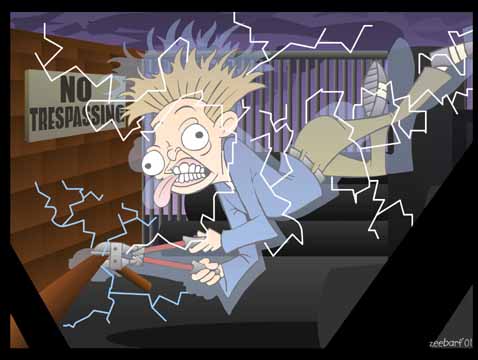