(5 September 2009, Oregon) Jake reached the summit of Saddle Mountain, and then and there he informed his friends that he planned to make a controlled slide down the cliff face. He would meet up with them in the parking lot or on the trail below.

Some folks are satisfied with the risks and rewards of dune sliding, and the chance of a 150-foot broken-limb tumble. Not Jake. The 18-year-old decided to 'git-r-dun' down a thousand-foot cliff, instead. He slid pell-mell down the escarpment--and what was intended to be a controlled rockslide ended abruptly 1000 feet below the summit, when his body came to rest in a steep ravine.

Friends were shocked. "We are shocked," they said, "because he is always doing stuff like this and coming out smiling." 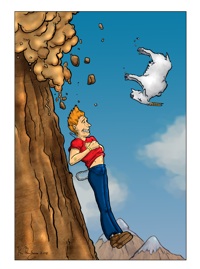