Watch Out for That Tree!
2004 Darwin Award Winner
Unconfirmed by Darwin 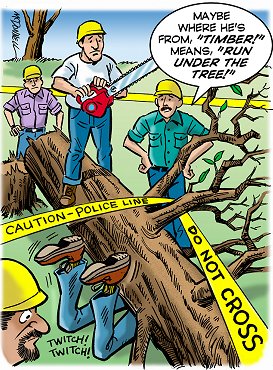 (11 May 2004, South Africa) The mighty oaks of Stellenbosch city were planted over 300 years ago. In recent years, the trees have begun to succumb to disease. The city has been cutting them down and planting new trees.

A man was sitting at a cafe, watching a team with loud chainsaws working to remove a tree whose center was dangerously decayed. The arborists had fenced the danger zone with red and white barrier tape, and posted notices of danger, taking every precaution to prevent damage to property or persons, life or limb.

Just as the tree was ready to fall, and the chainsaw operator was making the final cut, our man jumped up from his seat in the cafe, ducked under the safety tape, and hurried along the pavement to meet his girlfriend at a nearby shop. Despite the workers' frantic shouts, he stayed the course toward the tree that by this time was falling as planned.

The chainsaw operator tried a desperate tackle to get him out of the way, but it was too late! Missing the would-be rescuer by inches, the oak tree landed on the man's head, killing him instantly. And that is how one can qualify for a Darwin Award simply by walking under a tree.