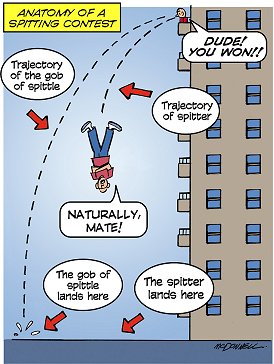 (21 February 2004, Ottawa, Canada) Ameer, a second-year engineering student at Carleton University, was celebrating his 20th birthday with friends in his 11th-floor apartment when they embarked on a spitting contest. His two friends had already made their marks. Ameer thought he could use his engineering skills to improve his performance. A quick mental calculation of trajectory, projectile velocity, and wind speed indicated that winning required more than a simple "stand and spit" technique. Ameer took a running start, flew over the balcony railing, and plunged to his death.

"It was purely accidental," said Ottawa police, "momentum carried him beyond." The building's security guard heard the thud. "He was one of the smartest guys I ever met in my life," the guard said. "He had a maturity beyond his age."

Spitting contest deaths are becoming a trend. In 1999, a 25-year-old soldier in Alabama won the first Darwin Award in this category in 1999, using the same techinque and achieving the same result. 23-year-old Bartosz of Mt. Prospect, was nominated for falling 20 feet onto his head in December 2005. Bartosz is remarkable for having fallen over an apartment railing without running start. But Ameer clearly trumps his competitors with his 11-story fall.

Perhaps the three have reunited in the afterlife, arm in arm, sailing through the air, their projectiles suspended in front of them like bullets in the Matrix movies.