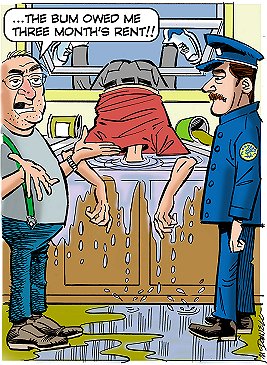 (26 May 2004, Wolfsberg, Austria) The manager of an apartment house was surprised to find the legs of a corpse sticking out an apartment window. Police entered the apartment and found the deceased man's head soaking in a sink full of hot water.

Apparently the out-of-work Austrian had returned home after a night of drinking and drugs. He decided to slip in through the kitchen window. The window was fixed at the base and tilted out, giving him just enough room to squeeze his head through as far as the sink before he got stuck. While flailing around trying to escape, he turned on the hot water tap.

Police were not sure why he had not turned off the water, pulled the plug, or--perhaps most important--entered through the front door, since they found the keys in his pants pocket.