Coke Is It!
2001 Darwin Award Winner
Confirmed True by Darwin

(12 December 1998, Canada) A man crushed beneath a vending machine while trying to shake loose a free soda? If you thought it happened only in Urban Legends you're wrong!

Kevin, a 19-year-old Quebec student, killed himself at Bishop's University while shaking a 420-kilogram Coke machine. He had been celebrating the end of final exams with friends. He died beneath the soda machine, asphyxiated, with a blood alcohol level slightly over the legal driving limit.

Kevin's last act was committed in vain. "Even as it fell over, the vending machine did not let out a single can," the coroner reported. Soda-holics take note! The report also states that toppled vending machines have caused at least 35 deaths and 140 injuries in the last twenty years.

For those with enquiring minds, I refer you to a website dedicated to the quest to clear Kevin's name. His family questions the official version on their website, aptly named cokemachineaccidents.com (currently ofline but Archived Here.) They recently sued Coca-Cola, two related companies, and Bishop's University for "gross carelessness." Their website exposé proffers several explanations for why Kevin's death was not his own fault: shaking coke machines "was common practice at the University," and anyway, unknown persons might have crushed Kevin with the vending machine in a bizarre murder, as it "would be difficult for one person to move" the machine.

In response, a spokesperson for Coke said that Canadian machines are now labeled with a warning that "tipping or rocking may cause injury or death." They have also installed anti-theft devices in newer models to keep people from obtaining free drinks.

DarwinAwards.com © 1994 - 2020
Submitted by: The Bitshipper, Dave Mann
Reference: The Canadian Press and Graeme Hamilton of the National Post 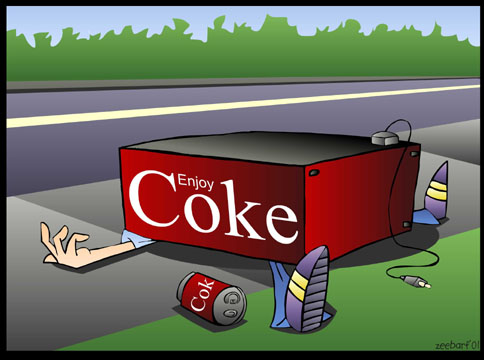