"Improper use of pruning shears can dull the blades." 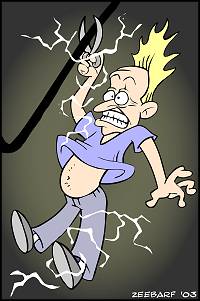 (30 May 2001, Hillsboro, Oregon) Ismael, 25, was driving a Toyota truck when he lost control of the vehicle, which careened into a mailbox, collided with a utility pole, and flipped onto its side, knocking down high-voltage power lines in the process. At that point, Ishmael climbed from the truck and into the path of evolution.

His dazed passenger survived, only to be arrested on an unrelated warrant.