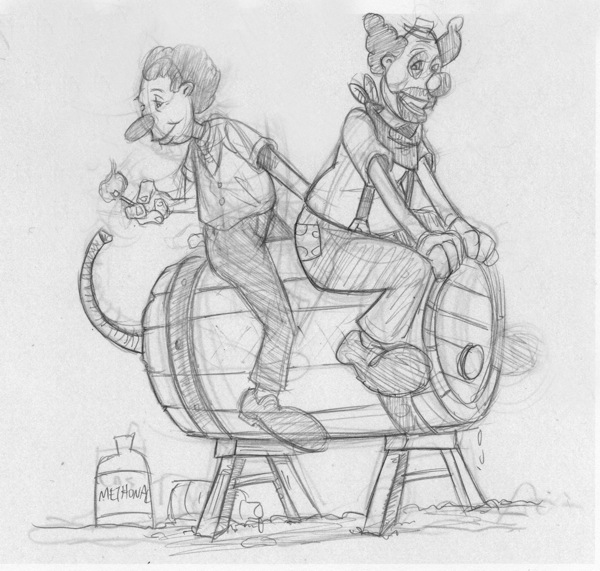 (19 July 2010, Washington) Thanks to Skagit Raceway, the town of Sedro-Woolley (pop. 10,000) fills with racing folks. During the American Sprint Car Series, two crew members--smart people with a high degree of mechanical ability--were working at a custom machine shop when they dreamed up an unusual thrill ride. The men put a a 55-gallon barrel in the parking lot, poured in four gallons of methanol, sat on top of the barrel, and lit the bunghole!

Apparently they thought the barrel would skid across the parking lot like a rocket, with a tail of flame shooting out, and two rodeo clowns sitting on top waving their caps and wooting! But instead of sliding across the pavement, well, let's just point out that four gallons of methanol in a 55-gallon drum greatly resembles a bomb.

The barrel blew up beneath them with enough force that the end of the barrel landed 120 feet away. The two inspired Sparks* landed in Harborview Medical Center in Seattle, where one man lost his life. The other survived with a sobering lesson on the power of internal combustion.

Working on a race car is a bit risky, but this was not a work-related shop accident. Rather, it was a dangerous and ill-conceived stunt by two bored men who were hoping to find some fun in a small town. Dear readers, please learn from the mistakes of others. You don't have time to make them all yourself!