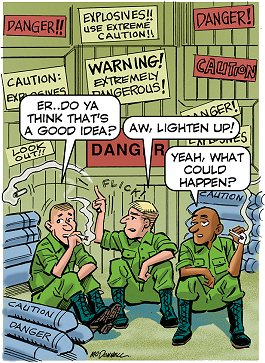 (6 May 2004, Ukraine) Piling up live artillery is grueling work, so it makes perfect sense that a group of soldiers would take a cigarette break at lunchtime. The warehouse was filled with 92,000 tons of ammunition -- until the soldiers lit up their ciggies and inhaled deeply, ignoring warnings that smoking can cause cancer. They flicked the butts away and went back to work. The glowing embers of the tobacco butts acted like slow fuses, which started a small fire that nobody noticed until it ignited a chain reaction of massive explosions.

The explosions lasted for a week, tossing debris as far as 25 miles away, destroying buildings in a two-mile radius, and forcing the evacuation of thousands of nearby residents. Red-hot shrapnel set off additional fires in nearby towns and ruptured a minor gas pipeline. Total damage from the smoke break was estimated at $750 million.

Miraculously, only one of the soldiers at the arsenal died in the disaster. Six soldiers were charged with "grossly neglecting the fire safety rules and smoking on the ammunition site."

[Sidebar: News accounts report five people killed by explosions, but only two as smokers. The nomination would be disqualified if innocent bystanders were injured. But an AP article said four died from "health problems aggravated by the stress of the disaster." Novosti said six soldiers were charged with causing the fire, rather than two, and the only direct death was a guard at the facility. It's not clear if the guard was also smoking, or if the other four deaths were caused by the explosions or simply ill health. Therefore, I am tentatively calling this a Darwin Award, despite minor misgivings.]