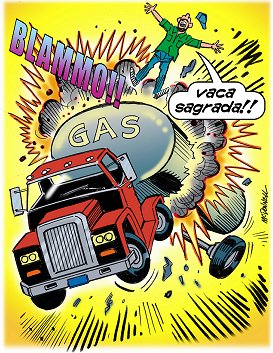 (29 January 2003, Brazil) At work, Manoel was responsible for cleaning out the storage tanks of gasoline tanker trucks. He had been employed in that capacity for two months when he ran afoul of fuel.

The 35-year-old began to fill a tanker with water, a standard safety procedure that forces flammable vapor out of the container. He returned an hour later to check whether the water level was high enough to proceed. But he had trouble deciding, because it was so DARK inside the tanker.

A resourceful employee, Manoel forgot the very reason why he was filling the tank with water when he lit a cigarette lighter to shed some light on the situation. His little test successfully determined that the water level was NOT yet high enough for safety. The vapor explosion launched him through the air, and he landed in the company parking lot 100 meters away.

Manoel suffered severe burns, blunt force trauma, and an injury to the head that exposed his brain. Our witless car washer had learned his terminal lesson in safety by the time the firemen arrived.