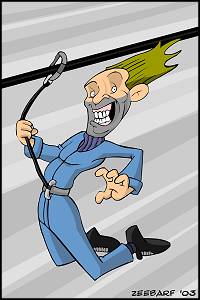 (8 September 2002, Italy) "Hey watch this!" A 53-year-old Glasgow man, attempting what police describe as a bizarre stunt, attached a climber's snap hook to an unused overhead tram cable and attempted to manually ride down the mountain. But the mountain was steep, gravity was constant, and he was unable to moderate his rate of descent. He accelerated out of control, and within seconds crashed against the rocks, and proceeded to bash his way 200 meters down the slope before impacting a pylon. Reports state that several people attempted to stop him from riding down the cable. He should have listened to their advice. When he came to rest, he was DOA.
Share