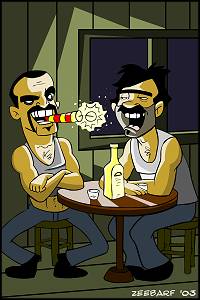 (1 January 2002, Brazil) The game of Russian Roulette, long a breeding ground for natural selection, was improved upon by two men with a unique approach to self-destruction.

On New Year's Eve, Antonio and his friend were befogged by Pinga, a traditional Brazilian liquor, when they began playing a Russian Roulette variant using holiday fireworks. Their version of the game consisted of placing fireworks in their mouths, then lighting the fuses and competing to see who would delay longest before spitting out the firework.

The man, dare we call him "winner," who discarded the explosive closest to the point of detonation was the victor of this battle of wills.

Their blatant disregard for personal safety was matched only by their foolish bravery. Antonio was our winner, holding one of the fireworks in his mouth a bit too long, and thereby thereby earning praise for his "courage" at his funeral.