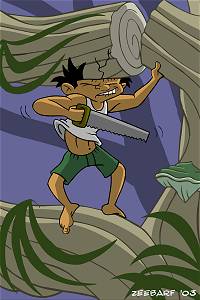 (18 February 2002, Hawaii) Millennia after an evolving human species descended from the trees, 30-year-old Joshua reversed the process, removing himself from the gene pool while perched in a tree. Joshua had hiked several miles onto a ranch and climbed a Koa tree under cover of darkness, intent upon stealing a branch of the expensive native hardwood. To his credit, he was smarter than a classic cartoon character, and didn't make the mistake of cutting the branch supporting him. However he was not smart enough to avoid cutting a branch directly above his head. The severed branch struck and killed him, and authorities found him still in the tree, twenty feet off the ground.