(15 July 1999, Tennessee) Seven firefighters from the Sequoyah Volunteer Fire Department, located in rural Hamilton County north of Chattanooga, decided to impress their Chief by surreptitiously setting fire to a house, then heroically extinguishing the blaze. The men apparently hatched the plan in order to help Daniel, a former firefighter, return to duty.

Unfortunately, Daniel's career plans were irreversibly snuffed when he became trapped while pouring gasoline inside the house. Surrounded by smoke and flames, he was unable to escape, and died inside the burning house on June 26.

His six accomplices are facing 87 years in prison for conspiracy, arson, and burglary.

One of our readers, Terry Boese, notes, "What makes me feel this is a genuine candidate, is that not only did he kill himself with an act of stupidity, but he is also no longer able to protect other would-be pyromaniacs from Darwin Awards. Had he been successful in his attempt to regain his position, he may have had a ripple effect in the gene pool." 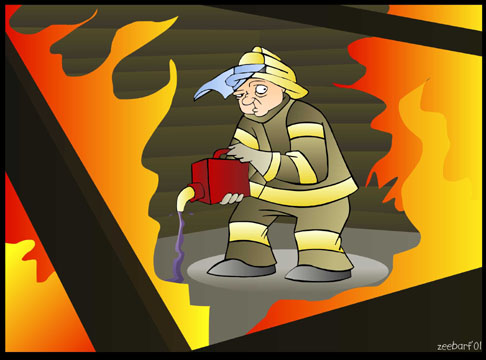