(15 July 1999, Alabama) A 25-year-old soldier died of injuries sustained from a 3-story fall, precipitated by his attempt to win a high-altitude spitting contest. The "former" military specialist had a blood alcohol level of 0.14%, paving the way for a well-earned Darwin Award.

He was so intent on victory - and so drunk - that he attempted to employ a dangerous and hitherto-untested technique to add momentum to his saliva. The contender backed away from the window, then hurled himself towards the metal balcony rail while expectorating.

In a tragic miscalculation, his momentum carried him right over the railing, which he grasped fleetingly before plummeting 24' to the concrete below.

There is no report on the status of the payload expelled into the night sky. 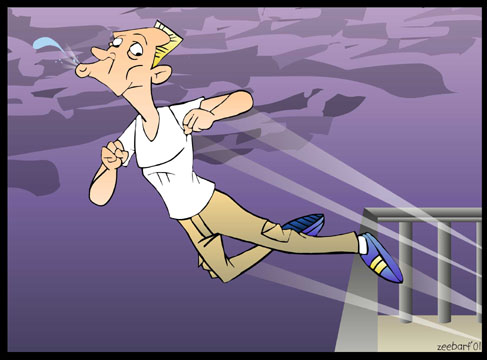