Some men will got to extraordinary lengths to prove how macho they are. Frenchman Pierre Pumpille recently shunted a stationary car two feet by headbutting it. "Women thought I was a god," he explained from his hospital bed.

Deity or not, however, Pumpille is a veritable girl's blouse compared to Polish farmer Krystof Azninski, who staked a strong claim to being Europe's most macho man by cutting off his own head in 1995. Azninski, 30, had been drinking with friends when it was suggested they strip naked and play some "men's games". Initially they hit each other over the head with frozen turnips, but then one man upped the ante by seizing a chainsaw and cutting off the end of his foot. Not to be outdone, Azninski grabbed the saw and, shouting "Watch this then," he swung at his own head and chopped it off.

"It's funny," said one companion, "when he was young he put on his sister's underwear. But he died like a man." 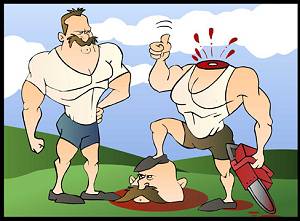