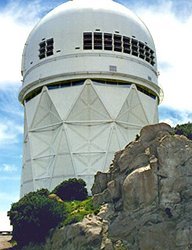 (30 April 1987, Arizona) The Kitt Peak National Observatory, located in the desert near Tucson, is home to two dozen telescopes, including the 4-meter Mayall Telescope, once the largest in the United States. It is also the site of the only modern Darwin Award involving an astronomer.

Astronomy is normally a sedate profession, mainly conducted from a computer console. But Marc, 36, took "head in the clouds" astronomy to a new level. One evening, Marc was operating the Mayall Telescope. From inside the dome, an astronomer cannot see enough sky to tell if there are cirrus clouds that will interfere with viewing. So he periodically pokes his head out a hatch below the dome, to see if the sky is still clear.

The Mayall observatory dome has an access ladder attached to the side. The ladder rotates with the dome, and is a potential hazard to things in its path. Anticipating "operator error," the builders designed the dome motor to automatically switch off if the ladder approaches the open hatch.

Observers are not supposed to open the hatch while the dome is rotating, but Marc didn't "observe" that key rule. He opened the hatch and peered out at the sky...

The momentum of the heavy dome keeps it turning for a few seconds after the motor is switched off. Long enough for the ladder to impact the outward-opening hatch. Slamming the hatch shut. Crushing the unfortunate astronomer's aspirations.

Marc continued to publish papers for several years after his death.

Darwin asks, "Is this nomination appropriate?"