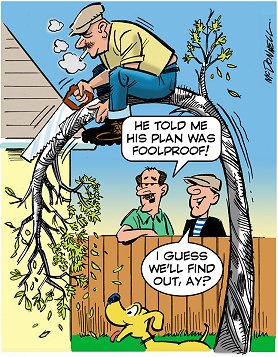 (1986, United Kingdom) In 1986 the UK saw its most violent storm in 350 years. Winds exceeded 90 mph, and an incredible amount of damage was done to property and people up and down the UK. Millions of trees were uprooted by the gales.

In Margate in the county of Kent, one unfortunate homeowner had a property bordered by three massive poplars. The wind had felled one, which came to rest across his back garden. Another poplar had been bent over just far enough to lodge its top under the soffit of his roof. The foliage was blocking his upstairs bedroom windows, and something had to be done.

This chap did not own a chainsaw, nor could he reach the trunk of the tree from the house, even when leaning out the window. So he decided to shinny up and saw off the top while sitting astride the trunk, with his feet wedged against the gutter of his roof. He had plenty of time to reflect on the wisdom of his position, as it took him 20 minutes of sawing before the bent tree, which experts estimate held the energy equivalent to small field gun--parted company with the portion trapped by the soffit, and sprang back upright.

His body was found in a neighbor's garden over a mile away. The police surgeon stated that his neck probably broke during the whiplash and he would therefore have known nothing of the impact with the ground.

Urban Legend?
wumpus argues, "The physics doesn't work. There is no way a bent poplar could rocket a human a distance of a mile." The submitter says, "This appeared in Kent newspapers and, like most rational beings, I too found it difficult to believe." Paul chimes in, "At best, the truth has been greatly exaggerated. The energy required to hurl a man a mile would be astronomical. If the tree held under the sofit hurled the guy a few yards away from his house, then I'd buy it. Methinks this is Grade A Bologna. Mr Z points out, "The 'hurricane' was 1987 not 1986 which leads me to question the veracity of the whole story."gollum421 says, "Ci punched in the windspeed and some average poplar statistics to determine how much energy stored in the poplar could be converted to kinetic energy for the guy, noted some air resistance -- nowhere near a mile. Ultra liberal estimations gave him about 80 meters."