(26 July 1991) Patrick lived to rue the day he planned a record-breaking 20-mile hike across the Badwater Salt Flats, the hottest place on earth. He completed 19.5 miles of his hike before collapsing on the scorching ground, never to rise again. Found with his body were a video camera and an empty three-quart water pouch.

The China Lake Rescue team located Patrick's parched body on his forty-first birthday, nearly two weeks after he set out on his desert hike. He was found only a half mile from his red Toyota truck, where gallons of fresh water waited on the seat. Patrick, a healthy 165-pound outdoorsman, had been dehydrated to 90 pounds by the blistering heat. What brought Patrick to such a sad state of desiccation?

Badwater routinely attracts extremists enticed by the lure of running a 150-mile course from Badwater to Mount Whitney, from the lowest point in North America to the highest point in the contiguous United States. Occasional brave souls attempt the one-way hike across Badwater to meet waiting friends and refill their water bottles. Only Patrick, our Darwin Award candidate, tried to make the trek alone with only three quarts of water.

According to District Ranger Mark Maciha, Badwater is consistently five to ten degrees hotter than nearby Furnace Creek, which registered a high of 134 degrees Fahrenheit in 1913. The summer sunshine heats the ground to almost 200 degrees, and the parched air approaches zero percent humidity. No rational explanation can be found for why this lifelong fitness fanatic failed to take sufficient water with him on his hike into this harsh climate. An estimated twelve quarts of water would have been required to survive the exertion of plodding through muddy salt.

Murder was ruled out by the autopsy, and suicide seems unlikely, as it was his third attempt to complete the trek. The most compelling theory is that he wanted to set the record for being the first man to make an unassisted round-trip hike across Badwater. A friend confides that he purposely kept rangers ignorant of his intentions because he knew they would watch over him.

And extra water is just so heavy!

Before his doomed hike, he boasted to several friends that he had calculated the exact amount of water he would need, and to save weight, he would take not a single drop more. In a lamentable miscalculation he carried only three quarts of water, which were simply insufficient to see him through to the other side.

Dr. Milton Jones theorized after the autopsy that Patrick may have sat down to rest with his truck within sight, but had lost so much body fluid that his heart was unable to pump the unnaturally viscous blood to his brain. He lapsed into unconsciousness and died.

Patrick was a healthy outdoorsman with an extensive knowledge of the desert. His father recalled, "He spent money on only two things: electronic equipment and going to the desert."

The video camera found by his body chronicles the first half of Patrick's hike before the batteries died. It ended with his haunting observation, "The only problem is that we have to hike back... This is the real world. One false move, and you're dead." 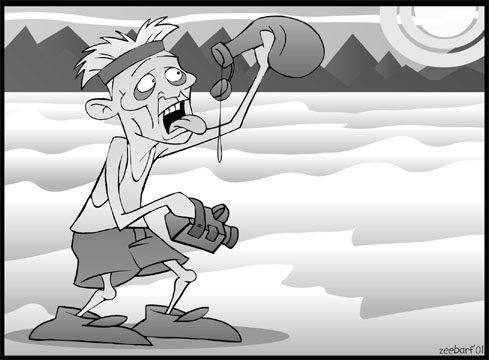