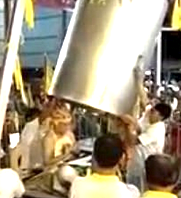 (25 October 2017, Malaysia) A spiritual magician died after accidentally steaming himself to death in a stainless steel wok while performing a ritual to 'cleanse body and soul.' Mr. Lim Ba, known professionally as Black Dog, had been performing human steaming for more than a decade despite family objections.

The 68-year-old guru sat in lotus position in the giant stainless steel steamer and rice, sweet corn, and vegetarian buns were placed alongside to also be steamed. 'Black Dog' clasped his hands in prayer as the lid was lowered over him and a fire was lit under the wok. "They really lit a fire under his buns."

But after thirty minutes this steamy scenario went wrong! Devotees heard the magician knocking frantically from inside the steamer. The lid was raised and Lim was found unconscious, steam billowing around him. Suffering from major second-degree burns, the man died of a heart attack.

The incident occurred at a temple in Kuala Sanglang, a small coastal village in northern Malaysia.