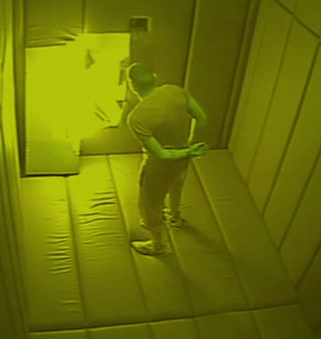 In Croatia stupid rises to a new level when a criminal in a padded penitentiary decides to whip out his contraband lighter.

(16 November 2015, Croatia) Bojan Bešić was a petty criminal who spent much of his life in prisons. A small-time crook with a police dossier as extensive as the literary works of Tolstoy, Bojan's career was marked by persistence rather than success. For example, death letters persistently sent to his ex-girlfriend landed the criminal 'mastermind' in Pula to serve an eight-month sentence, adding to a cumulative 5 years already spent behind bars.

During his incarceration, Bojan's behavior was so 'outstanding' that on a fateful Monday the prison guards locked him in a padded cell in solitary confinement. Little did they suspect that the cool-down time would leave him literally more hot-headed than before. The brilliant prisoner had managed to smuggle a lighter into the rubber room!

Both hands were cuffed behind his back, but that did not prevent our persistent pal from retrieving the lighter and flicking the Bic. Captured on video, at 3:35PM, Bojan strikes the lighter and purposely starts a fire near the door. The video, tactfully edited, shows the euphoria of the moment as the rubber wall begins to ablaze. As he nonchalantly swaggers around his tomb, the fire grows. Suddenly panic sets in as Bojan realizes that suffocation is imminent! What a surprise.

The prison guards were really not expecting the cell to burst into flames, and why would they? They noticed the smoky situation too late to save the prisoner from himself, making The Case Of The Charred Crook the first prisoner death in the history of the country. At 25 years of age, the only excellence Bojan Bešić displayed was in the manner of his demise. We recognize his outstanding effort with the not-coveted Darwin Award. Better luck next time.

Gratitude to Phil for his excellent translation, wit and style that lent a delicious flavor to the news article.