(10 June 2014, London, England) Humans who aspire to high levels of desire may join the "mile-high club" yet our dreams of sex in high places also have couples eyeing more accessible heights such as rooftops and romantic balconies. Balcony balls are a common sight for neighbors across from Knights Tower, an apartment high-rise on the bank of the Thames river in South London. The city lights sparkling on the surface of the waters are irresistible to lovers, and neighbors have seen people on the balcony doing all sorts of things.

On a warm Tuesday night in the summertime, a hot couple was observed kissing and frolicking as they engaged in sex on a sixth-floor balcony. Some neighbors closed their drapes while others enjoyed the entertainment, each according to his inclination. It was the usual reality programming for the neighborhood.

A party was going on inside the flat. When people came out onto the balcony the couple would stop their game, only to resume playing the moment they were alone on the balcony. "The last thing I expected was to see them falling down five floors," said one observer, but "the guy was lifting the girl and putting her on the bannister, he kept on doing it, they were going back and forth," and suddenly the amorous hotties were balls up and over the railing.

Natural birth control -- the couple did not survive the fall. 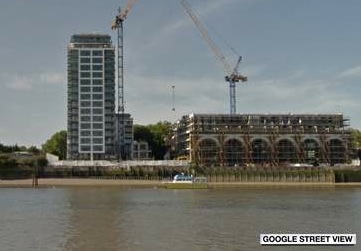