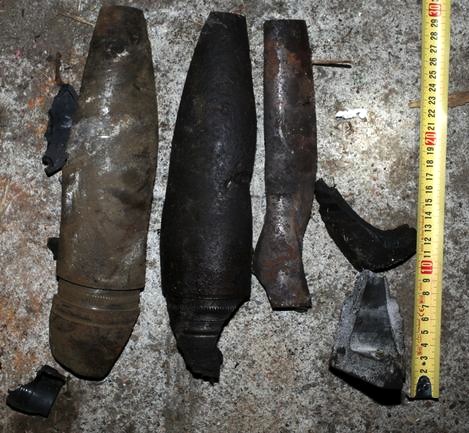 (13 September 2013, Finland) Two brothers-in-law were united by a common interest that is shared by a small but regrettably significant proportion of the population: collecting war weapons. By the date of their deaths, they had collected over 100 frag grenades, bazookas, fuse materials and ammunition from the forests of Lapland. The men enjoyed collecting the weapons as trophies, yet had no training in the handling and disposal of explosives! One can see how this is all going to end.

Around 6pm On A Friday Night The 24- And 27-Year-Old Men Were Both In The Garage With Their Antique Weapons Collection. The Older Man Had Finished Defusing A Grenade And Was carefully removing the payload. The object of his attention was not a smAll Hand Grenade But Rather A Large 75-Mm Anti-Tank Grenade, 42 Centimeters (17 Inches) Long! Ironically The Attempt To Render It Harmless resulted in the opposite outcome. In the northern town of Kemi the peace of the garage was shattered by a small explosion. The man holding the grenade died in the ambulance, and the other survived with serious injuries.

In the aftermath of the explosion 200 people within a 150-meter perimeter surrounding the garage were evacuated to a school, and then dozens of kilograms of explosives were safely removed by the Peräpohjolan Police Department. Evacuees returned to their homes with gratitude for their lives. If more war weapons had been set off in a chain reaction then there would have been victims and damaged buildings up to 300 meters away from the garage!

Thankfully it was not a full detonation; rather than explode the old explosive material combusted and burned. Since no bystanders were injured, this is a wonderfully apt nomination for Darwin Award plus Honorable Mention. "In Finland you do not disassemble bomb, bomb disassemble you." ORIGINAL SUBMISSION