(3 June 2009, North Carolina) Greensboro was inundated with four inches of pouring rain in two hours, stranding several cars on flooded roads. Rosanne T., 50, was not deterred. She hopped on her moped and drove to a convenience store where she "possibly had a beer," according to her mother, before deciding to blunder home through the storm. She phoned home to say, "My moped has two rubber wheels, Mom, I'll be fine."

North Carolina does not require a license to own a moped.
Ms. T. had acquired hers two years previously after a DUI conviction.

The Highway Patrol had blocked off several roads that were inundated with water, including Rosanne's path home. But she rode right past the officer and the barriers, lost control of her vehicle, and fell into the swollen creek below. The officer retrieved rope from his vehicle and proceeded to haul her from the water.

He then interviewed the woman, probably inquiring about her motivation for speeding through a roadblock during a flash flood. When the officer returned to his patrol car to call for assistance, Rosanne took the opportunity to escape--by jumping back into the creek!

The officer attempted to rescue her again, but alas, it was too late.

The victim's mother speculated that her daughter's motivation for jumping into a flooded creek was to rescue her drowning moped. "She loved that thing." 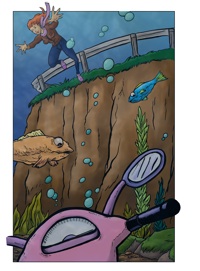