Adelir Antonio, 51, was not so lucky (Video) 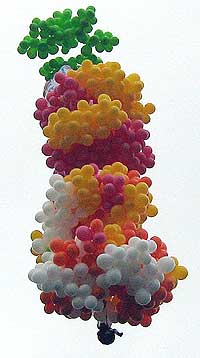 (20 April 2008, Atlantic Ocean) A Catholic priest recently ascended to heaven on a host of helium balloons, paying homage to Lawn Chair Larry's aerial adventure. In 1982, Lawnchair Larry attached 45 weather balloons to his lawnchair, packed a picnic lunch, and cut the tether--but instead of drifting above Los Angeles babescape as planned, he was rocketed into LAX air traffic lanes by the hefty lift of the balloons!

This priest's audacious attempt to set a world record for clustered balloon flight was intended to publicize his plan to build spiritual rest stops for truckers. But as truckers know, sitting for 19 hours is not a trivial matter even in the comfort of your own lawn chair.

The priest did take numerous precautions, including wearing a survival suit, flying a buoyant chair, packing a satellite phone and GPS. However, the late A.A. made a fatal mistake -- he did not know how to use the GPS.

The winds changed, as winds do, and he was blown inexorably toward open sea. He could have parachuted to safety while over land but chose not to. When the voyager was perilously lost at sea, he finally phoned for help--but rescuers were unable to determine his location since he could not use his GPS. He struggled with the unit as the charge on the cellphone dwindled and died.

Instead of a GPS, the Priest let God be his guide.

Over the next few weeks, bits of balloons began appearing on mountains and beaches, indicating that God had guided him straight to heaven. Ultimately the priest's body surfaced, confirming that he had indeed paid a visit to his boss.

The kicker? It's a Double Darwin. Catholic priests take vows of celibacy. Since priests voluntarily remove themselves from the genepool, the entire group earns a mass Darwin Award. Adelir Antonio wins twice! 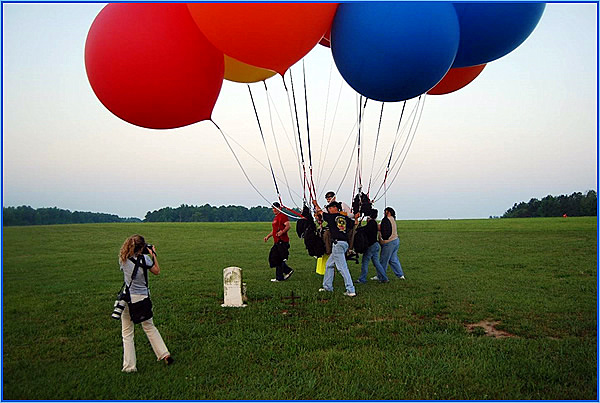 Darwin says: "A hot air balloon is maneuvered by altering altitude. The wind direction changes as one ascends (generally toward the right in the northern hemisphere) so a skillful pilot can use altitude to shift the downwind track. (airborneballoons.co.uk)
By comparison, a mass of individual balloons is completely at the mercy of the wind. The balloons used by the priest were described as party balloons, which are far more fragile than the weather balloons used by Lawn Chair Larry."

Reader Comments:
"One way ticket to paradise."
"to heaven--or bust"
"There but for the grace of Tecumseh..."
"Don't get too carried away."
"Chairway to Heaven?"
"God's will be done!"
"God Supports Darwin!"
"Sorry about your loss. On a brighter side, you could have lost this guy..."
"A story showing the danger of relying on GPS."
"Fly me to the moon!"
"How many balloons do you think you'll be needing?"
"Anyone you want to give balloons to?"
"They did not teach aerodynamics at the seminary."
"See what happens when you don't get laid enough?" "This is one for the 'believers'."