(10 December 2007, Russia) As a child, Sergei promised his grandmother, "I will establish for you the elixir of immortality! I want you to live forever." As an adult, we find Sergei sitting in his college biology class, licking potassium cyanide off his palm. He had found that magic elixir. He swallowed poisons daily, to strengthen his body and protect him from death.

He regularly consumed small quantities of toxic mushrooms, arsenic, and cyanide salts, and urged others to join him. During daring night-time excursions, Sergei often said, "I shall not die. I have swallowed poison for years, and today, nothing can kill me."

After swallowing the cyanide, he began to feel ill, and asked his classmates to fetch some water. But instead of drinking plain water, he dissolved the rest of the cyanide powder in it, and consumed the solution. Sergei was an intelligent student, interested in chemistry and anatomy. He earned a gold medal, and was accepted into two universities, the Medical Academy and the Ural State University.

But Sergei's scientific premise was flawed. Instead of immortality, he had discovered the elixir of mortality. He went into convulsions, slipped into a coma, and died without regaining consciousness. His father praised Sergei as a gifted chemist who died for the sake of science. 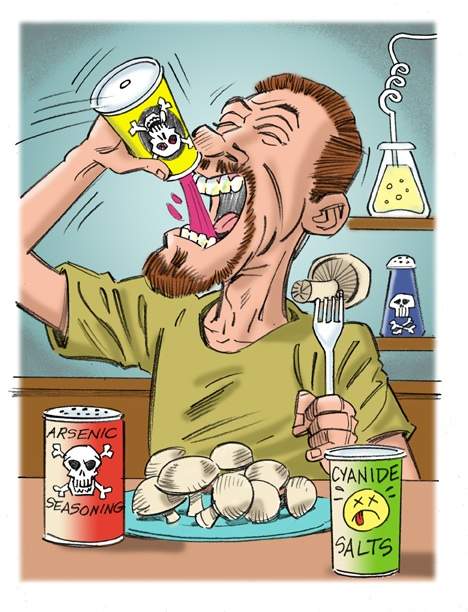 Reader Comments:
"I am happy I never had him as a lab partner!"