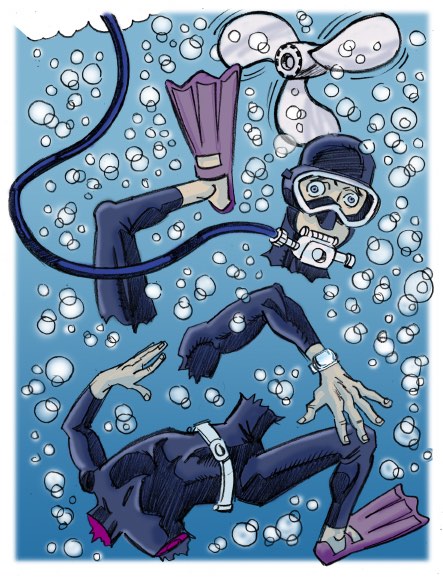 "He died doing what he always did... having a go."

(Broome, Australia) When you work as a diver on a pearl farm, there are many ways to "buy the farm." Our head diver Mitchell Ether, known as Sharky, was not afraid to take risks to get the job done. He was a loose gun in a company of cowboys. Sharky seemed destined to make an original exit.

A near miss happened in Roebuck Bay. He miscalculated the amount of fuel needed for the air compressor that pumps air to the divers below, and the compressor was about to stop. Instead of FOLLOWING STANDARD PROCEDURE and bringing everyone up and refuelling during a surface interval, Sharky surfaced alone to top up the fuel tank while the compressor was still running!

The deck was unsteady and naturally he spilled some petrol. The compressor had been running for hours and its red-hot exhaust ignited the spilled fuel, and the flames followed the fuel into the petrol tank. Boom! The $200,000 brand-new dive boat was fully kitted out for the pearl farm including oxygen for resuscitations. Boom! The mushroom cloud from the oxygen bottle explosion startled observers all the way back in town, five kilometers away.

Luckily, Sharky jumped back in the water before the big oxygen explosion. He and his crew were picked up by another dive boat!

Despite this "incident" Sharky was promoted to skipper of a larger vessel. However, the new skipper found excuses to don his old dive gear. One such excuse was a mooring rope tangled around the propeller. Instead of asking an outfitted diver for assistance, Sharky chucked on his dive gear, started the compressor, clipped on a dive hose, and jumped off the back of the boat. But he neglected to take the boat out of gear...

Once freed of the mooring rope, the spinning prop entangled his hose and started reeling him in. His "lifeline" pulled him through the prop, and Sharky died on the way to hospital.

Sharky didn't have any children (that he knew of) but he did have a wicked sense of humour. I hope he forgives me for submitting him for a Darwin Award! He died doing what he always did... having a go.