The one that didn't get away.

(9 September 2006, Florida) A fearsome mythical giant named Goliath was felled by David's humble sling. But a modern leviathan vs. a speargun is another tale altogether, as a 42-year-old man named Gary discovered.

Although it was outlawed in 1990, poaching giant groupers remains surprisingly popular in the Florida Keys. These muscular fish can weigh 600 pounds, yet underwater hunters voluntarily choose to tether themselves to the creatures with spearguns, in defiance of both the law and common sense.

Of this elite group, our Darwin Award winner further distinguished himself by disregarding one essential spearfishing precaution. The "fit and experienced snorkeler" embarked on a grouper hunt without a knife to cut himself loose, guaranteeing that his next attack would be his last. "Not wearing a knife is like crossing I-95 with your eyes closed," explained one experienced diver.

In those final hours, the tables were turned, and the leviathan fish was given an opportunity to experience "catching a person." The body of the spearfisher was found pinned to the coral, 17 feet underwater. Three coils of line were wrapped around his wrist, and one very dead grouper was impaled at the other end of the line. 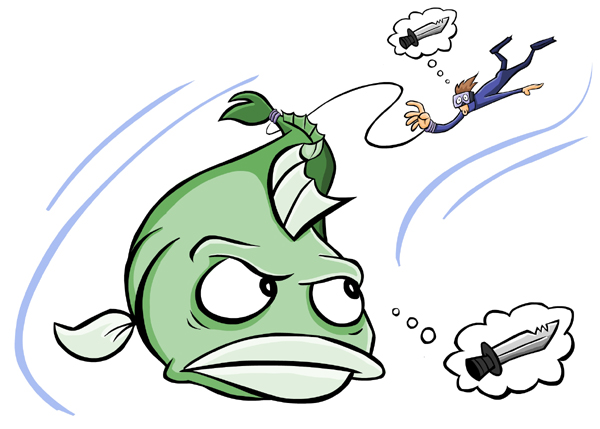 David C. Halley points out that 'slingshot' was originally misused in this story. "David's weapon was not a slingshot but a sling, an entirely different device. Slingshots require rubber so could not have been constructed prior to ~1800 C.E."