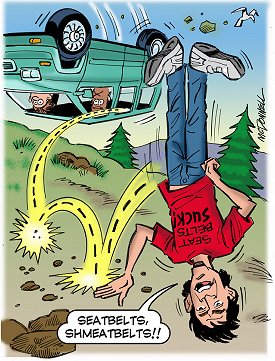 (5 January 2005, Nebraska) In September of his senior year at the University of Nebraska, 21-year-old Derek wrote an impassioned declaration of independence from seatbelts for his college newspaper. Although "intrusive and ridiculous" seatbelt laws saved 6100 lives a year, according to statistics from the U.S. Congress, Derek concluded with the statement, "If I want to be the jerk that flirts with death, I should be able to do that."

Derek "was a bright young boy, a 4.0" majoring in five subjects and planning to attend law school. He was also smart enough to tutor friends in subjects he didn't even take. But good grades don't equate with common sense.

Derek was returning from a holiday in San Antonio, Texas. The driver of the Ford Explorer and his front seat passenger both wore seatbelts. Only Derek was willing to buck the system, sitting without a seatbelt in the back seat because, in the words of his newspaper column, he belonged to the "die-hard group of non-wearers out there who simply do not wish to buckle up, no matter what the government does."

When the SUV hit a patch of ice, slid off US 80 and rolled several times, Derek, in an involuntary display of his freedom, was thrown from the vehicle. He died at the scene. The other occupants of the SUV, slaves to the seatbelt, survived with minor injuries.

Alcohol was not involved in the accident.

Reader Comments:
Eric B: "This explains why there aren't more anti-seatbelt activists"