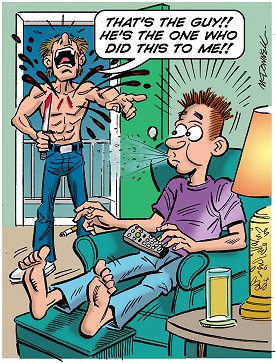 (19 March 2005, Michigan) "Unusual" and "complicated" is how the Missaukee County sheriff described the mysterious death of 19-year-old Christopher.

After an evening spent imbibing large quantities of alcohol, Christopher noticed a shortage in his liquor supply that could not be attributed to his own depredations. He concluded that his neighbor had stolen a bottle of booze! He menaced the neighbor with a knife, to no avail, whereupon he retired to his own apartment to brood about revenge.

Finally he figured out the perfect way to get back at that conniving bottle-thief: Christopher would stab himself and blame the neighbor!

A witness saw Christopher enter the bathroom as he called 911. He calmly informed the dispatcher that his neighbor had stabbed him. Witnesses said he looked fine when he emerged from the bathroom, but a moment later gouts of blood spewed from his chest. Suddenly he began screaming begging for help. The dispatcher heard a woman shout, "Why did you do this?" He collapsed at the door of his apartment.

Deputies arrived quickly, but Christopher had already bled to death from self-inflicted stab wounds to his chest. An autopsy determined that he had stabbed himself in the chest twice. The first wound apparently didn't look dangerous enough, so he tried again. The second time, the knife plunged into his left ventricle. This wound was plenty dangerous: he had only two minutes to live.

Christopher died in vain. His deathbed accusation of his neighbor failed, as a witness confirmed that the neighbor was not in the apartment. All Christopher got for revenge was an accidental death sentence.