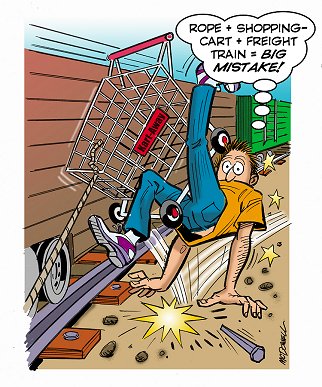 (16 February 2004, California) Alan, a 43-year-old electrician, was hanging out with his 17-year-old son and the son's girlfriend. They were feeling cooped up, so they hopped the back fence to play by the railroad tracks that ran behind it.

Alan thought it would be a blast to watch a shopping cart being dragged by a train. He tied one end of a 20-foot rope to the shopping cart, and the other end to a full water bottle, as a weight.

When an 86-car Union Pacific freight train rumbled through at 15 mph, Alan stood behind the cart and hurled the bottle at the train. The bottle broke! So he tied another bottle to the rope. Standing in front of the cart, he lobbed the bottle under the train and gleefully noted that his plan worked this time--until the shopping cart whipped into him, and dragged him over a mile along the tracks, reportedly pulling up two spikes in the process.

A spokesman for the Federal Railroad Administration said this was "an extremely unusual occurrence." Alan was dead before the engineer could stop the train. After the incident, Police Sgt. Joe May warned pedestrians not to loiter near train tracks.
Share