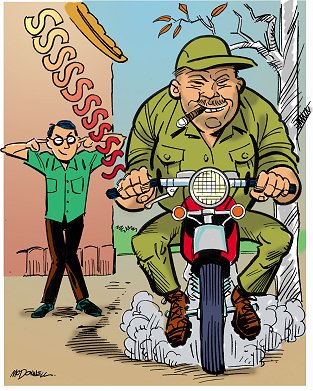 (September 7, 2003, Cambodia) Khim, nicknamed "The Big Giant," was an intimidatingly large former military policeman when he arrived at the Phnom Penh home of a drug dealer to extort money and amphetamines. He was a much smaller man soon afterwards.

He pulled the pin from a grenade to threaten the dealer, who immediately decided to give him the items he demanded. Then Khim, who had been drinking, forgot to put the pin back before slipping the grenade into his pocket. He walked to his motorbike, well satisfied with the transaction. As he climbed aboard... the grenade exploded.

Whether the drug dealer recovered his cash (and in what condition!) is unknown.

Reader Darren says, "Returning the pin to a grenade will not render it inert, once triggered; no fuse-mechanism will halt until it is blown from the grenade. Returning a pin to a 'thrown' (or otherwise triggered) grenade is a losing proposition. I think our bandit, a military-police officer, remembered the pin, but skipped basic-instruction.
More than you want to know about hand grenades.