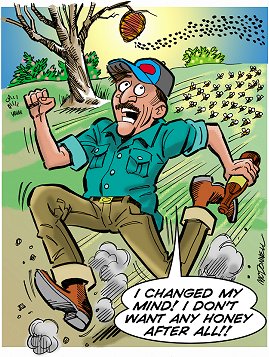 (September 2003, Mexico) An unidentified 60-year-old Escobedo man was still thirsty after drinking what most would consider "too much alcohol." He stumbled toward a nearby beehive, hoping to follow the beer with a bit of honey.

He thought the bees would surely share. Instead, they obeyed a Darwinian signal bred into them for millennia. Over a thousand noble fighters gave their all, sacrificed their stingers and their lives to protect the hive. The man, quite reasonably, responded with terminal anaphylactic shock.

A hospital spokesman disputed the theory that bees had killed him, attributing his demise to, "the stupid things drunken people do," and pointing out that he was otherwise healthy and would have enjoyed a long life. "The combination was lethal."