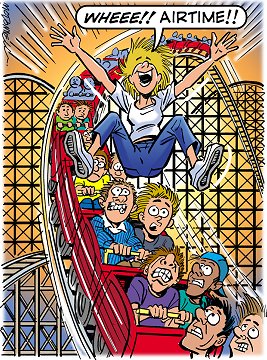 (31 May 2003, Indiana) Tamar came all the way from New York for the annual Stark Raven Mad event at the Splashin' Safari waterpark at Holiday World, where members of the American Coaster Enthusiasts planned to rendezvous on Memorial Day weekend. The 32-year-old eagerly looked forward to riding the Raven, later described by Spencer County Prosecutor Jon Dartt as "one of the world's most terrifying roller coasters."

Tamar planned what coaster enthusiasts call "catching airtime," standing up during the ride to show bravery. The park staff warned the "spirited and intelligent" Harvard MBA, along with the rest of the group, "Don't mess with our safety equipment." Tamar's seat belt and lap bar restraint were in place when the train left the station. But you can't catch airtime that way. Her seatbelt was later found unbuckled and tucked into the seat cushions.

As the train swooped over the precipice into the "infamous drop" on the fifth turn at 60 mph, where the G-forces are notoriously skyward, Tamar unlatched her seat belt and stood up. The train dropped, but Tamar didn't. She caught good air until she landed on the ground, 69 feet below.

A reader says, "The park allowed people to ride without properly pushing down the restraints. This has been a topic of discussion on several roller coaster discussion boards. I had been to two different coaster events there, and the ride ops were allowing the behavior I mentioned. There is no hard evidence that Tamar was standing. The part of the ride she fell from is located in the woods, far from the midway, and no one could see her at that point on the ride."

Darwin replies, "I'm skeptical about your statement. Roller coaster parks are sticklers for safety, and particularly with a group of boisterous coaster fans, they would be careful to engage the safety restraints. The seatbelt was found unbuckled and TUCKED INTO THE CUSHION. I think Tamar does merit a Darwin Award, for her role in defeating the safeties."

Another reader adds, "It's about her family trying to sue the amusement park. This link provides further response."