(29 September 2002, United Kingdom) The Parisian Yamakasi craze, a building-jumping fad inspired by wire stunts in action films, has been likened to a martial art by its practitioners. This urban "art form" was the inspiration for a television advertisement wherein an office worker travels home by leaping between buildings, over fences, and around antenna.

Marc, 22, decided to engage in a spot of building jumping during his free time. However, this Darwin Award Nominee failed to take into account the fact that he was not a highly trained gymnast, and could not clear the gap between two multi-story car parks in Maidenhead. He also failed to consider the result of a body hitting concrete from a height of 40 feet.

He jumped the gap once, then he and his freinds went to a pub. Afterwards, they returned to the car park and he tried it again... landed... wobbled... and fell backwards to his death.

His friend said, "We just did stupid stuff when we were bored, like finding gaps to jump." The result was inevitable... 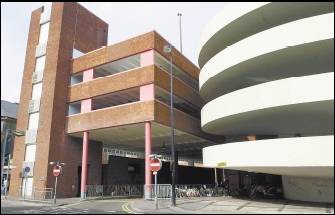 The Broadway car park where the incident occurred.