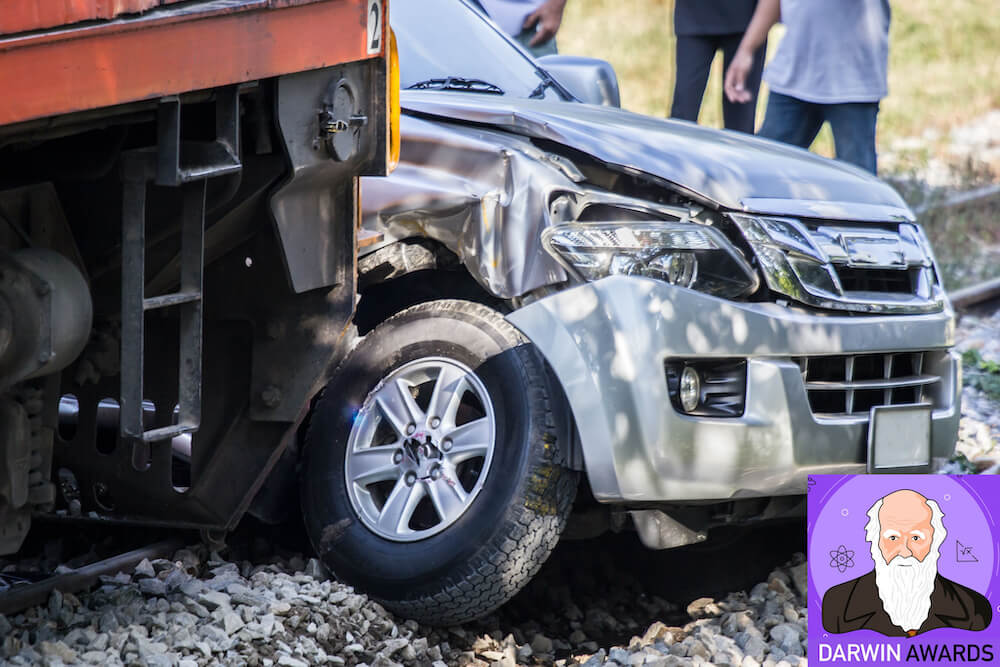 Nevertheless, Jackie Chambers, a43-year-old Olathe man, managed to be struck and killed by a train after his vehicle broke down on Interstate 35. His attempts to repair his 'sloppy jalopy' had failed, so he stepped away from the busy freeway to call for help. As luck would have it, he chose to stand on the train tracks paralleling the road.

When the train engineer spotted Jackie C. standing on the tracks, he saw a man holding a cell phone to one ear and cupping his hand to the other ear to block the thundering noise of the oncoming locomotive!

Authorities are at a loss as to how to prevent train deaths. In Long Island, New York, engineers formed a support group, as every one, without exception, has involuntarily killed someone. The baffled engineers wonder how anyone could be unaware that a train weighing hundreds of tons has too much inertia to stop on a dime -- or even a football field.

(3 November 2006, Michigan) FACT: In a collision the great mass of a Train guarantees the Train will win. Forgetting this Captain Obvious Law Of Physics, a 20-year old man was walking down the railroad tracks in Comstock Township near Kalamazoo. This, in and of itself, is not even close to Darwinian stupidity because trains are loud. They announce their approach from a distance, giving pedestrians ample time to clear their path. However our Darwin contender stacked the odds in the train's favor by wearing headphones with the music turned up loud. Louder than the train's whistle, apparently.

The news report didn't mention what song he was listening to, may have been 'Slow Train Coming' by Dylan. Despite several loud blasts of the horn by the train engineer, our Darwin contender kept strolling down the rails in a musical reverie until the Amtrak train offered him an alternative Greatest Hits smash—removing him from the gene pool in one quick blow.

Historic August 2002 #DarwinAward Kansas: A disabled sloppy-jalopy driver calls for tow awhile walking along the RR Tracks parallel to I-35. Focused intently on the device (as one does) he is oblivious to the frantic whistle of the oncoming locomotive... https://t.co/2nlHTiW1ni