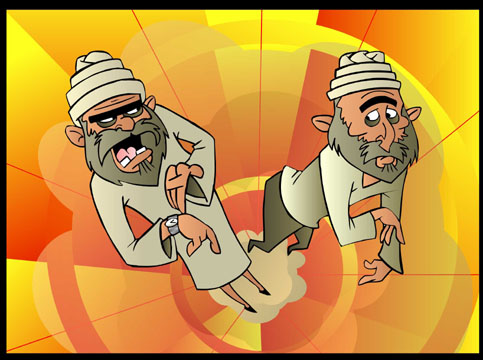 (5 September 1999, Jerusalem) In most parts of the world, the switch away from Daylight Saving Time proceeds smoothly. But the time change raised havoc with Palestinian terrorists this year.

Israel insisted on a premature switch from Daylight Savings Time to Standard Time to accommodate a week of pre-sunrise prayers. Palestinians refused to live on "Zionist Time." Two weeks of scheduling havoc ensued. Nobody knew the "correct" time.

At precisely 5:30pm on Sunday, two coordinated car bombs exploded in different cities, killing three terrorists who were transporting the bombs. It was initially believed that the devices had been detonated prematurely by klutzy amateurs. A closer look revealed the truth behind the explosions.

The bombs had been prepared in a Palestine-controlled area, and set to detonate on Daylight Saving Time. But the confused drivers had already switched to Standard Time. When they picked up the bombs, they neglected to ask whose watch was used to set the timing mechanism. As a result, the cars were still en-route when the explosives detonated, delivering the terrorists to their untimely demises.