(December 1997, Pennsylvania) Jerome Bullock, a prisoner in the new Allegheny County Jail in Pittsburgh, attempted to evade his punishment by engineering an escape from confinement. Jerome constructed a hundred-foot rope of bedsheets, broke through a supposedly shatter-proof cell window, amd began a hand-over-hand climb to freedom down his makeshift ladder. 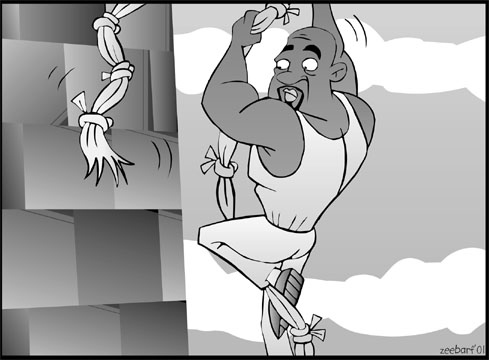 It is not known whether his plan took into account the curiosity of drivers on the busy street and Liberty Bridge below. It certainly did not take into account the sharp edges of the glass, the worn nature of the bedsheet, nor the great distance to the pavement. The bottom of the knotted bedsheet was 86 feet short of the ground. But our hero did not reach the end of the rope. The window pane sliced through the weak cloth and dropped him to his untidy demise 150 feet below.

(3 November 1998) Apparently the rumor of the previous death did not reach a prisoner at the same jail, who was awating transfer to federal penitentary. One year later, he tied eight bedsheets together and rappelled from his seventh-floor window, only to find the rope fell 25 feet short of the ground. Luckier than Jerome, he merely fractured his ankle and scraped his face.

Submitted by Eric, Christina, and an alert reader from Pittsburg.
Reference: Pittsburgh Post-Gazette