(23 December 1991, Florida) This account of an aircraft accident is quoted directly from the National Transportation Safety Board report, with comments added in [brackets] for clarity. 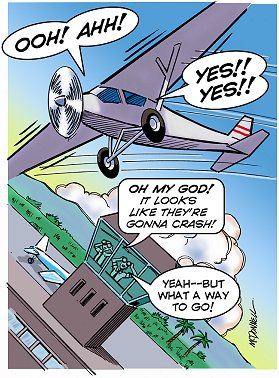 The private pilot and a pilot rated passenger [two pilots] were going to practice simulated instrument flight. Witnesses observed the airplane's right wing fail in a dive and crash. Examination of the wreckage and bodies revealed that both occupants were partially clothed and the front right seat was in the full aft reclining position. [The pilots had converted the co-pilot seat to a bed.] Neither body showed evidence of seatbelts or shoulder harnesses being worn. [They were lying on the bed.] Examination of the individuals' clothing revealed no evidence of ripping or distress to the zippers and belts. [Their lack of clothing seemed to be voluntary.]

The National Transportation Safety Board determines the probable cause(s) of this accident as follows:

The pilot in command's improper in-flight decision to divert her attention to other activities not related to the conduct of the flight. [The pilot and co-pilot were having sex, and nobody was flying the plane.] Contributing to the accident was the exceeding of the design limits of the airplane leading to a wing failure. [The lack of a pilot caused the plane to fly erratically, over-stressing the wing and leading to a crash.]

Reader Comments:
"The ultimate high!"
"Perhaps Durex ought to sell parachutes as well..."