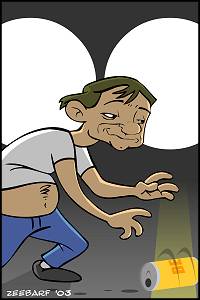 Was the beer half-full, or the brain half-empty?

(15 October 2002, Texas) A man chasing a half-full beer can across a Houston freeway was struck by a Chevy truck before he could retrieve his prize. He was taken to a nearby hospital, where he is listed in critical condition.