"Several years ago Newsweek or Time Magazine had a short peice, including photo, about a college professor who conducted live demonstrations of the flamability of bovine discharges. Methane needs to be mixed with oxygen to burn, and the combustion needs to proceed under pressure to explode. The experiment showed a dramatic but harmless torch effect.The picture was comical." Bob McLaughlin<

(California) A dairy worker who heard that bovine flatulence was largely composed of methane, and potentially explosive, decided to apply the scientific method to the theory. While one of his contented cow charges was hooked up to the milking machine, he waited for the slight tail lift which dairy workers know signals an impending expulsion, generally something to avoid. Our hero struck a match. His satisfaction at seeing the resulting foot-long blue flame lasted mere seconds, before the flame was subsumed by a rectal contraction. 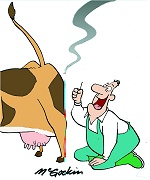 The poor Holstein exploded, killing the worker who was struck by a flying femur bone.