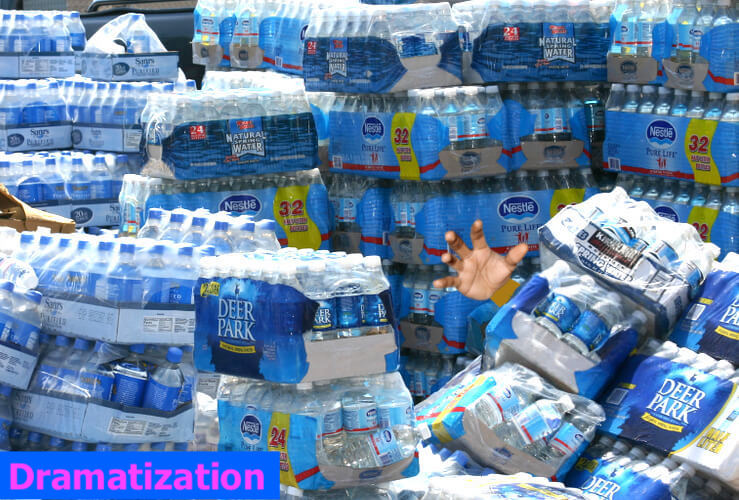 (19 April 2022, Italy) No water shortage in this Italian supermarket, where a sudden tidal wave of water spelled doom for a ransacker. The man, 46, was a well known character in the city of Cattolica. He snuck into the back of the closed market on Easter Monday—and that break-in was his last.

He paused to enjoy a drink of water, pulling a bottle from a towering tableau, and the whole darned stack collapsed on top of him like a tidal wave! Employees returned to the shop the next day, and were confronted by a collapsed mess of crates.

A few hours into the workday they finally began to sort the collapse FB Fans in overdrive!

Achim K, "It was a rather fluid situation, until someone floated a solution." stack. Lifting the first crate, an arm emerged! It was immediately clear that a tragedy had taken place. But what...?

Thanks to the CCTV footage, the carabinieri were able to reconstruct the last moments of the 46-year-old's life as he tugged the bottle free, and was crushed by the weight of the crates. People were sad he had died, but then again it was twice his fault: breaking in, and alone in the store taunting gravity to do its worst.

Facebook Fans Gone Wild:
'Thirst Trap' -Wendy
'Not just a Darwin award but instant Karma' -Robert Moreton
'Water' mistake to make... -Martin H.
'Water way to go!' -Tom C,
'Would this mean his water broke?' -Meo Map CC
'Water broke him.' -TC Riddle
'H2whoahno—' -Brad Smyrk
'So much for water being the healthy choice.' -Gordon McK
'Unexpected item in bagging area.'-William Leslie Spratt
'That must have been a slippery situation for the employees.'-Joe Spruill
'I bet his ghost wished he had broken into an off-licence now.' -David Ward
'This is a proof that theft desecrates the thief.' -François Gobbi
'There has to be a segue to this story. In Italy, drinking water is practically free, available at public fountains everywhere. We'll probably find out this was a murder staged as an accident.'
-Andrés Suaréz Rosselli
It happened on Earth Day? 'Death by Plastic.' Jan O'L
I've always said that too much dihydrogen monoxide is dangerous, but do they listen? -Mark Hodgkins
'Someone found out how Dihydrogen Monoxide, even in a supposedly 'safe' container, can still be lethal.' -Peter Tuijtjens
'Wrong! It's Oxygen Dihydride!'-Robert Moreton
Isn't there a book titled 'Let The Water Hold Me Down'? -Jeff Peters
And then the Talking Heads' Once In A Lifetime -Jeff Peters