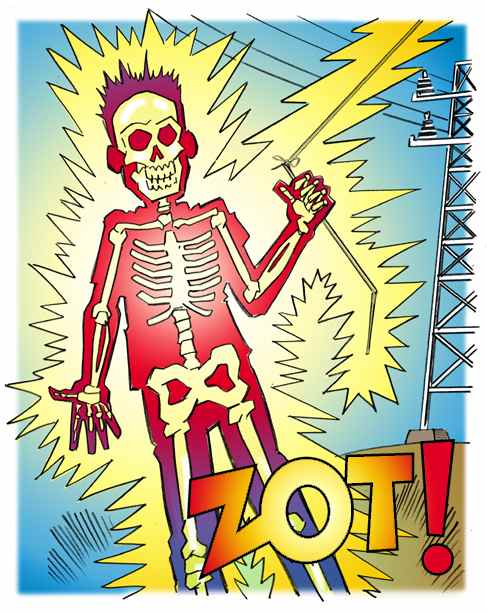 (17 April 2017, South Carolina) It is tough to live without electricity. Although the Blue Ridge Electric Company says there are options for people who cannot pay their bill, those options were not extended to a family living in the Friendship community near Seneca. After two weeks without hot water or refrigeration, a man attempted to restore power to his home. Illegally.

What happens when a powerless thief grabs a metal ladder and jumper cables?

His bid for grid power veered from pathetic to ludicrous when he leaned an aluminum ladder against the pole, climbed up and applied the jumper clips to an energized conductor. A witness heard a sound like a shotgun as 7,200 volts arced from the primary wires across jumper cables designed for 12 volts, through the man's body, down the ladder, and into the ground.

The thief was jolted from the top of the pole and thrown to the ground. He was taken to hospital with contusions and electrical burns. Still living, he cannot win a Darwin Award yet is eligible for an Honorable Mention for his questionable and nearly fatal choices.