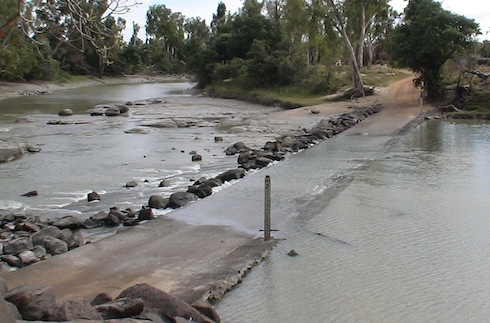 (Australia, December 2010) The East Alligator River in Australia's Northern Territory is crossed at Cahill's Crossing. The river also has two boat ramps, one upstream and one downstrean of Cahill's Crossing. Not long ago, a Euro tourist drove into the parking lot of the upstream launch area in her hired 4WD vehicle and, seeing a concrete ramp disappearing into the water, assumed that she had reached Cahill's Crossing. She gunned the engine and drove right into the water! As the vehicle began to sink into the crocodile-infested waters, she overcame her shock, extricated herself from the sinking 4WD, and managed to swim back to dry land before the reptiles had time to tie on their dinner bibs. It was a near miss for a foolish Miss!
(Reference: Tales From The Tinny by Rob Smith.)

However one can hardly fault a tourist for mistaking the boat ramp for a crossing, as the river is subject to tidal flooding and the rocky causeway often resembles a boat ramp! The crossing is a treacherous snare for local vehicles, too. In December 2010, a family of three young boys traveling with their uncle and grandmother were stranded on the flooded causeway after Grandma insisted that they make a night-time crossing. "This is my country," she said. "We will be fine." Salties were gathered around the car by the time the family was pulled to safety by a rescue boat. Ironically, the uncle was driving with a suspended license. (Reference: ntnews.com.au)