Darwin says, "An eyebrow-raising story from an ER doctor."

(5 July 2006) I was the lucky orthopedics resident on call the night of July 4th a few years ago. Midnight passed quietly but as dawn broke on July 5th, the telephone rang. A fellow was in the trauma unit suffering partial amputation of a finger due to an explosion. I figured that this was a typical firecracker injury and headed over to attend the patient.

I found a gentleman peppered with thousands of black spots of embedded gunpowder, face, chest, and arms. His left middle finger was essentially missing, and the space between his right thumb and index finger split open. His airway was intubated and he also had a chest tube, far more intervention than would be required for a routine firecracker injury.

The man's wife told me what happened in plain words.

He had built a small homemade cannon in order to celebrate Independence Day. He and his wife both had been drinking heavily throughout the evening. When they regained consciousness the next morning and saw some unused gunpowder, the gentleman figured he might as well finish it off. He packed his DIY cannon with gunpowder using a cut-off broomstick. While packing the cannon, he was also sucking on a cigarette. Lo and behold, the ash fell and ignited the powder...

The broomstick was fired into his chest, ripping through his hands as hot gunpowder sprayed out of the cannon.

We took him to the operating room to clean his wounds and complete the amputation. As we removed the stub of his middle finger, I confided my grave concerns about his future to the attending physician. He looked at me, puzzled. I asked, "How is this man going to be able to drive without his left middle finger?" 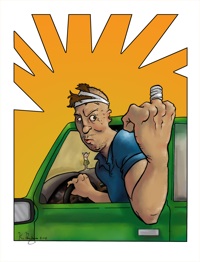