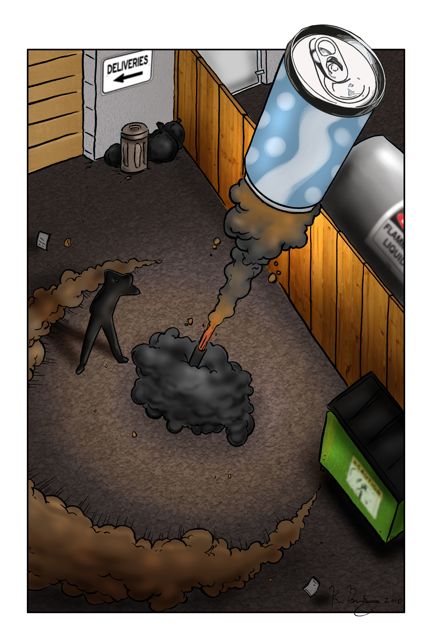 This moment of blissfully pure and unadulterated stupidity happened while I was managing a successful franchise exhaust shop a few years back. I had won a contract to build custom exhausts on a series of hot rods. Due to the exacting workmanship required, I did these jobs after hours when I wasn't distracted by customers and staff.

Tired and a bit bored one evening, I took a break, swigged some soda, and set the Coke can down on the pipe rack. It fell neatly into a length of exhaust pipe. This raised some intriguing possibilities. I wondered if a small acetylene explosion would launch a can from the pipe. As it happened, an acetylene set was ready to hand, and I proceeded unimpeded with my experiment.

I welded a plate over one end of the tube, and bored a small hole in the side, just above the plate. I dropped an empty can down the pipe and introduced some acetylene and oxygen though the hole. Test One went well. My trusy Zippo ignited the gas and there was a loud pop--but the can launched a measly ten feet in the air.

Being a perfectionist, I knew I could do better. The empty can was slightly smaller than the 3" pipe, and much could be gained by wrapping the can to fit the pipe. Test Two was better. The pop was louder, and the can launched upward with enough force to dent the tin roof of the building.

At this point I realized that I could do some damage, so I moved my enterprise out back behind the shop before proceeding with Test Three. I carefully wrapped a full Coke can with a rag, oiled to reduce friction. I rammed it hard down the pipe, but could only get it down about one foot. I aimed the tube straight up (to maximize altitude) and filled the three remaining feet with oxygen and acetylene. I must confess that I experienced a brief flash of doubt, but I overcame it, knelt down a careful eighteen inches from the pipe, and lit the mortar.

The result was considerably more violent than the prior launches.

An extremely loud explosion and a searing flash of heat knocked me over. I caught a brief glimpse of a burning projectile disappearing at high velocity into the night sky. The recoil of the launch had driven the tube a foot into the ground, and the open end of the pipe sported a distinct bell shape. Luckily the pipe had held, and had not blown up in my face. Stunned, I staggered back into the shop and knocked over a six foot length of exhaust pipe. Instead of the usual crash, I heard nothing but a high-pitched buzzing. Break time was over. I carried on working.

Half an hour later I was surprised by two cops tapping me on the shoulder. They were a wee bit agitated, as they had been addressing me for awhile and thought I was ignoring them. After much shouting and several written messages, it became apparent that they were investigating a loud explosion heard behind the 20,000-litre propane tank at the gas station next door. The tank was ten feet away from my test site, behind a wooden fence!

The gas station had, of course, been evacuated. Due to my impaired hearing, I had failed to notice the four fire engines outside, and was blissfully unaware of the mayhem going on next door. Naturally enough, I denied any knowledge, but my burnt and deaf state didn't help my case. Then a curious cop followed the oxy-acetylene hoses outside...

The incident cost me a severe telling off by the cops and permanent hearing issues, but I count myself lucky. I must confess, though, sometimes I sit back and wonder... What was I thinking?

And where did that Coke can end up?