Darwin says, "This is my favorite Near Miss!"

(September 2007) A man was splitting seasoned wood early one autumn in preparation for the quickly approaching winter. One after another, he would drive his sharp axe through a log, then toss the split wood onto the pile. He was making light work of the logs when he came to one with a particularly large diameter.

Feeling overzealous, he decided to split the log anyway. He lined up his shot, and brought the axe down dead-center, only to bury the axe blade deep in the girthy log without splitting it. With a swift action, he jerked up on the handle to free the axe for another swing. In doing so, the log scooted forward about a foot before the axe broke free.

Rather than move the heavy log back into place, the man stepped forward a foot to take another swing. The second swing met with the same result as the first, as did the third attempt, the fourth, and so on. In his relentless determination to split the unsplittable, the man did not notice that he and the log had traveled some twenty-five feet across the yard, and were now positioned beheath the clothesline. 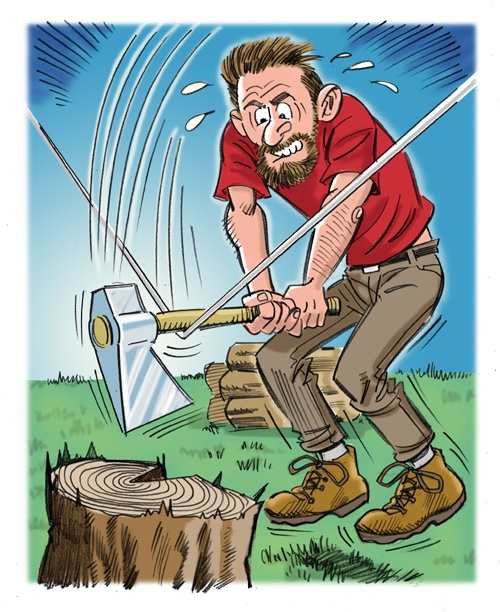 As he brought the axe down for another whack at the log, the axe head caught the clothesline, which acted in the same manner as a bow string. The axe had barely touched the top of the log when the clothesline reached its maximum draw, propelling the axe head back toward the man at an ungodly velocity. It found its mark right between his eyes.

Fortunately, the blunt side of the axe head made contact, and rather than killing him, it merely collapsed his sinus and fractured his skull. He recovered, and learned a very important lesson: Always be aware of your surroundings when hurling a sharp object through the air with great force.

I KNOW this story to be true, because the man of whom I speak... was me.