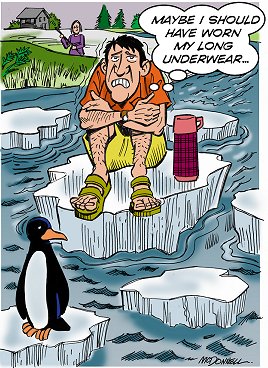 (6 April 2003, Quebec, Canada) Denis, described as a "woodsman," was previously nominated for an Honorable Mention for trying to adopt a bear cub as a pet. He stole "Buddy Bear" from its snarling mother and dragged it behind his jet-ski to subdue it. Quebec, the only Canadian province with no animal protection laws, was unable to prosecute Denis for that incident. But in a karmic inevitability, Denis is again in the spotlight.

During the spring thaw, Denis found himself fascinated by the ice floes drifting rapidly down the Gatineau River near Ottawa. Shortly thereafter, a downstream resident was cleaning her car, "when someone ran up to report a man floating downriver on a little piece of ice." That man, of course, was Denis. "After we called 911 we went to watch. He was traveling pretty quick because the water is fast."

Denis's impulsive ride ended where the ice floes piled up on a hydro-boom strung across the river, above a set of rapids. This left him stranded on a 15-foot cake of ice in the middle of the frosty Gatineau River. Two young men in a rowboat rescued our adventurer, thereby preventing him from capturing a Darwin Award that day.

When police asked him what he was thinking, Denis said, "I just felt like going for a ride."